The Tunnel Project: To Sea (Solo Flute or other treble instrument)

Though originally written for flute, “To Sea” may also work well on oboe, clarinet, saxophone, or violin (read as written).

How does PDF delivery work?
PDF delivery allows for quicker access to the music and the flexibility to print the correct number of parts for your ensemble. Once payment clears, you will receive a download link to your licensed files within 1 business day.

The Tunnel Project is/was a series of musical pieces composed with tunnels in mind. Each installment in the series used a certain tunnel’s individual acoustic, locational, and thematic elements to create a site-specific piece of music. (That said, performers are welcome to play these pieces wherever they choose).

“To Sea” was written for a giant drain pipe along a bicycle path in El Cerrito, California, which is part of the Cerrito Creek’s drainage journey from the Berkeley hills to the San Francisco Bay. I envisioned a singular leaf making its way down the creek, occasionally getting caught on rocks, twisting and turning here and there, and passing through various narrow and wide portions of the creek (as represented by the sections of varying close and wide intervals in the piece) until it reaches the Bay. The piece ends on a written “C,” mostly for the purpose of making the title punny.

Though originally written for flute, “To Sea” may also work well on oboe, clarinet, saxophone, or violin (read as written).

Preview the first page below: 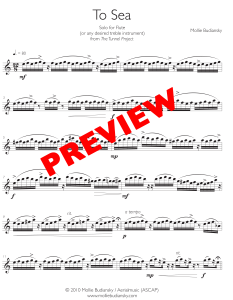